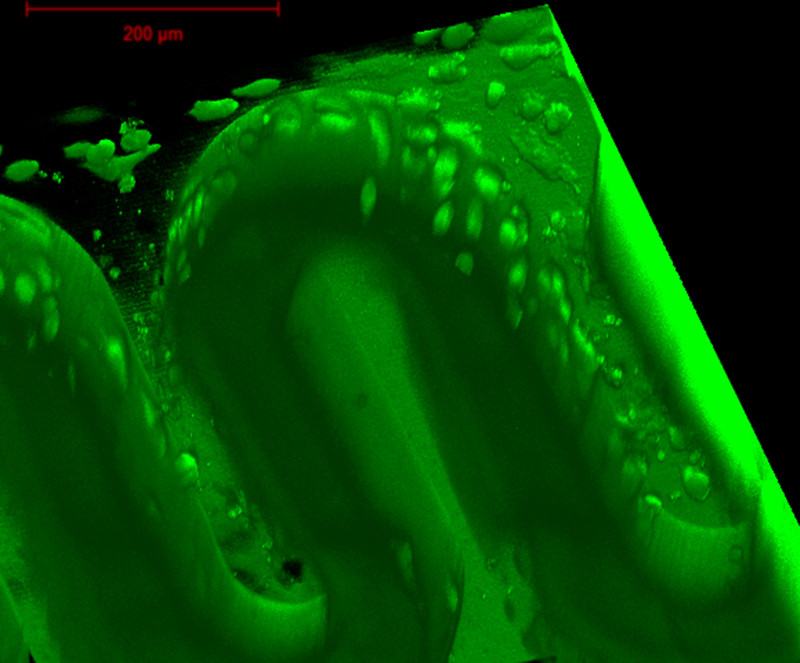 At the placental barrier a complex exchange of substances takes place between mother and unborn child. It is not yet fully understood what determines which substances are allowed to pass or blocked. To be able to study the placental function in a highly controlled and reproducible way, scientists at the TU Vienna have developed an artificial model mimicking nature. Via two-photon polymerization, which allows them to realize highly precise patterns, they created a placental barrier on-a-chip.

“Our chip features two regions, one representing the fetus, one the mother”, explains Denise Mandt, who worked on the project in course of her diploma thesis, “in between we construct the partition wall via a special 3D printing technique – resulting in an artificial placental membrane.” The basal membrane itself is replicated using a gelatin-based material, closely mimicking composition and properties of the natural extracellular matrix. Human umbilical-vein endothelial cells (HUVEC) on one side represent the fetal compartment while human choriocarcinoma cells, isolated from placental tissue (BeWo B30) simulate the maternal syncytium.

“We used a hydrogel with good biocompatibility” explains Aleksandr Ovsianikov from the Institute of Materials Science and Technology at TU Vienna, member of the cluster. “To mimic nature we create a surface featuring microvilli where the placental cells can attach and form a surface that is very similar to the natural placenta.”

On the chip important biological parameters such as pressure, temperature, geometry and nutrient supply can be closely monitored and influenced, allowing for targeted tests of single parameters such as the application of therapeutic substances. The controlled environment makes it possible to observe disease progression and healing rates in a standardized, reproducible way.

“The organ-on-a-chip technology is a revolutionary approach in biomedical engineering, getting attention from clinical diagnostics, biotechnology and pharmacy“, says Prof Peter Ertl, head of the Cell Chip research group, which was substantially involved in the project. “The manufacturing of human mini-organs on a chip aims for the development of individualized therapeutic approaches and moreover poses an alternative to in vivo studies.”

Nutrient transport from mother to the unborn child is a crucial aspect of fetal development and known to be affected by diseases of the mother, such as diabetes, or high blood pressure. The placental barrier on-a-chip can be used to investigate different pharmaceutical, clinical and biological scenarios and thus give answers to important questions of pathophysiological research.